着ぐるみ (kigurumi) is the Japanese name usually for costumed animal characters. The name comes from the Japanese term (着る: to wear) and (くるむ: to be wrapped in). These suited performers are sometimes found at shopping malls, theme parks, and booths at cosplay conventions. For example, Disneyland costumed characters such as Mickey Mouse and costumed “mascot” characters at sports events would be referred to as kigurumi by the Japanese.

Haru is an anime character kigurumi (in Japanese can also be categorized under 美少女着ぐるみ), which involves the portrayal of more humanoid characters by means of masks and body-stockings. Cosplay performers of this style are called “Doller”. Cosplay performers of this style think the kigurumi are moving dolls. So, they introduce themselves as the person who moves the doll, a doller.

To learn more, you can read the interview given by a friend of mine here 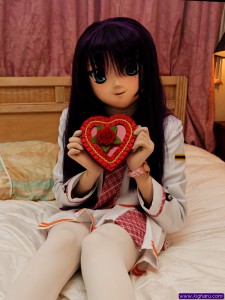